SEN. JV Ejercito is urging fellow legislators to pass the proposed Freedom of Information (FOI) Act of 2013 he filed before the Senate, marked as SB 217, as this could be a good deterrent against scams and illegal transactions in government institutions.

“If there is FOI, scams like the pork barrel scandal could have been prevented,” Sen. Ejercito said, adding that FOI promotes transparency especially in government projects.

“FOI remains just a bill perpetually stuck in the legislative mill. What the constitution promises seem to remain as such, still just a promise,” Sen. Ejercito said.

The young legislator said the Philippine Constitution upholds the people’s right to know and be informed about all policies, projects and programs of government that involve the use of taxpayer’s money.

“People need to and must know how public officials exercise their powers and authorities, how they spend public funds, what contracts and agreements they sign and seal on our behalf,” the legislator added.

Sen. Ejercito said “the right to information is our protection against government abuse as it is also our power to make government accountable. It is time we dissolve the shroud of shadow that covers these government transactions.”

The Senator said the FOI is one of the best ways to restore the faith of the people to the government, particularly the Senate and House of Representatives.

In the recent 15th Congress, Sen. Ejercito, who was then Representative of the City of San Juan, was one of the principal authors of the FOI.

The senator said the Filipino people have had enough of reports of corruption in the government and the public is up in arms against corrupt officials, as viewed by the anti-pork barrel rally in Manila on Monday.

Sen. Ejercito said the FOI should be part of the government’s push for reforms to bring back the trust of the people and the credibility of the institutions that had been tarnished by the P10-billion pork barrel scam.

“We need to let the people know. It is their right to be informed, especially in projects of the government, since it is taxpayers’ money that is being spent for these programs,” Sen. Ejercito said. (END)

JV thanks public for boost in SWS-Business World survey 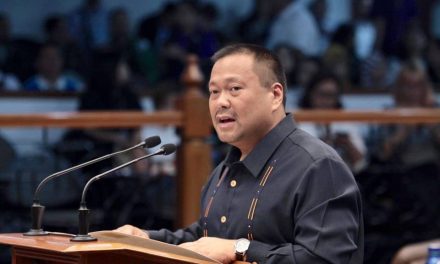