Senator JV Ejercito welcomed the holiday season by urging his colleagues in the Senate to make the proposed P2,000 increase in the monthly SSS pension as early Christmas gift to pensioners. The Senator delivered his co-sponsorship on Tuesday to support the passage of the measure which is awaiting Senate approval.

Ejercito said that he filed a similar bill in the Senate, though his goal was to grant pensioners additional P3,000.00 across-the-board for their monthly pension, plus another P500.00 for its annual increase until it reached P5,000.00.

“At present, the monthly pension that our retirees and other pensioners have been receiving is not enough to cover the basic needs of a family. For those SSS members who has 10 credited years of service, they are only receiving P1,200.00. Ilang kilong bigas lang ba ang mabibili ng P1,200.00? Paano na ang pambili ng ulam at gamot, pambayad sa kuryente at tubig? Kulang na kulang ang P1,200.00,” Ejercito said.

The Senator also believes that the regular adjustment of the SSS pension rates is imperative to keep them fairly responsive to the basic necessities of private employment retirees. 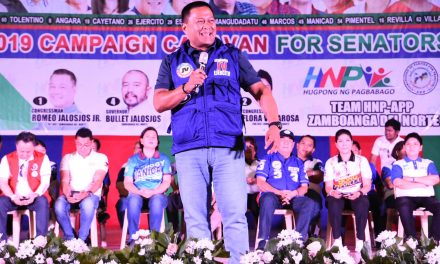