Senator JV Ejercito today urged President Benigno Aquino III to take heed of the owning up of mistakes by former United States President Ronald Reagan, who apologized to his people for the US secret sale of arms in Iran 28 years ago, to bring swift closure to bereaved relatives and the nation over the death of 44 PNP-Special Action Force commandos in Mamasapano.

Ejercito made this statement a day after President Aquino absolved himself and blamed PNP-SAF ex-Chief Getulio Napeñas for the bloody massacre of 44 elite policemen in Maguindanao.

Ejercito cited Reagan’s statement, for context, when the US President apologized on national television for the Iran-Contra Affair scandal, “First, let me say I take full responsibility for my own actions and for those of my administration. As angry as I may be about activities undertaken without my knowledge, I am still accountable for those activities. As disappointed as I may be in some who served me, I‘m still the one who must answer to the American people for this behavior.”

“President Aquino should mull over the actions of former leaders who considered themselves answerable for the fatal mistakes committed under their administration. Admitting fault would not make President Aquino’s leadership weak. The fact is, the Filipino people are just waiting for him to do it,” the senator said. 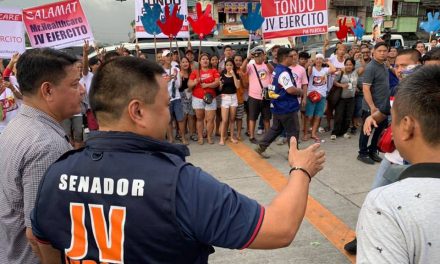