“This is sad news. My deepest sympathies to Vice Chair Ghazali Jaafar whom I have talked to a lot during BOL deliberations,” Ejercito said in a statement.

Ejercito said Jaafar is considered as “one of the biggest pillars” in the fight for Moro independence and Mindanao peace, noting the Muslim leader’s contributions in public service and involvement in programs to attain lasting peace.

The senator said he had several discussions with Jaafar concerning the Bangsamoro Organic Law (BOL), which provides the establishment of an autonomous political entity known as the Bangsamoro Autonomous Region.

“He (Jaafar), together with Chair (AL Haj) Murad, welcomed me in Camp Darapanan which I will never forget. Again, my deepest sympathies on his passing,” Ejercito said.

He said that while the death of Jaafar is sad, “I am sure that he died with a sense of fulfillment as he witnessed the signing and ratification of the Organic Law.” ###### 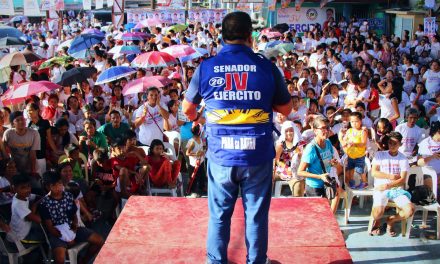